The Scottish Geology Trust is keen to offer people involved with Scottish geology the chance to share information about Scotland’s geology with a wider audience. This is the third in a series of blog posts exploring the geology of Scotland, written by Alex Neches.

The land between the Great Glen Fault to the northwest and the Highland Boundary Fault to the southeast is known to geologists as the Grampian Terrane. It extends offshore to comprise the eastern half of the Shetland Islands and part of the southern Inner Hebrides. It is here where geologists from all over the world gather to examine a fragment of the Caledonian orogenic belt – an ancient mountain chain whose peaks were once as high as those of the Himalayas – as well as to investigate the dramatic effects of metamorphism and the behaviour of minerals under conditions of burial, heat and pressure.

In simple terms, metamorphism represents the physical and chemical transformation of rocks, when the containing minerals alter because of changes in heat and pressure. When continental plates collide and Earth’s crust is crumpled, folded and uplifted into mountains, rocks are buried, heated and compressed. Minerals in rocks are stable under certain conditions of heat and pressure, so when these conditions change, minerals break down and form new minerals, which assemble into different rocks. 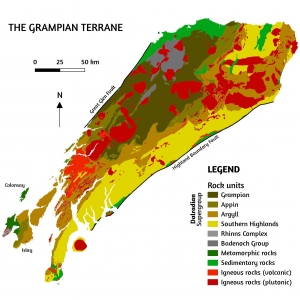 The main part of the Grampian terrane consists of metamorphosed sedimentary rocks, but in places it can be seen that these lie on top of older continental crust – the basement rocks. In the Grampian Terrane, the basement rocks are neither as old nor as homogeneous as the basement rocks of the Northern Highlands Terrane to the northwest. In fact, different basement rocks exist, and not all are well exposed. The Rhinns Complex is visible only in the islands of Islay and Colonsay. The outcrop area is so small that on a national geologic map it can easily go unnoticed. These igneous rocks originated from Earth’s upper mantle 1800 million years ago and were squeezed, crushed and metamorphosed into gneiss shortly after formation. Because of geographical proximity and coincidence in the timing of metamorphism, geologists once believed this basement to be a fragment of Scotland’s famous Lewisian Gneiss of the Hebridean Terrane. It is now known this is not the case. The Badenoch Group represents a different basement that outcrops on a much larger area in the mainland. These rocks, which are also as old as 1800 million years, started life as sediments carried by rivers and streams. They are very similar to the Moine Supergroup of the Northern Highlands Terrane and were metamorphosed by the same Knoydartian event(s) that also metamorphosed the Moine sediments about 800 million years ago.

The old basement of the Grampian Terrane is covered by a very thick suite of sedimentary rocks known as the Dalradian Supergroup – a sequence of sandstone, siltstone and mudstone deposited into a series of shallow and deep ocean basins. Careful inspection of the rocks reveals that the older sediments deposited in shallow sea water display a more ordered layering, with large particles at the bottom and finer particles on top, while younger sediments deposited further away in deep water are unsorted; this was likely caused by marine landslides as material tumbled to the ocean floor. The sediments, together with a series of more recent igneous intrusions, were affected by metamorphism and deformation during the Caledonian orogen.

The deposition of the Dalradian Supergroup can be traced back to the end of the Precambrian – the earliest part of Earth’s history that comprises more than 80% of the geologic time. Around 800 million years ago, the Rodinia supercontinent that dominated Earth’s geography began to break apart. The Grampian Terrane, much like its northwest neighbour, occupied the centre stage within its realm. As large continental masses moved away from one another, Earth’s crust was being pulled apart to create a series of basins that were gradually filled with large amounts of sediment. The source of these sediments could have been any of the three ancient continents that had formed Rodinia, and that even after its break-up continued to surround the Grampian Terrane – Laurentia, Baltica and Amazonia; which one of these was a question that had to be answered. 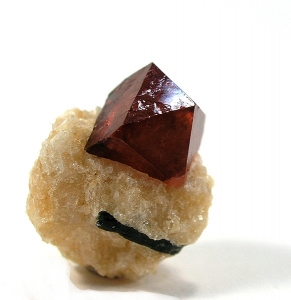 Hand specimen of Zircon, measuring approx. 1 cm. Zircon grains are very hard and durable. They can withstand the extreme conditions of heat, pressure and even partial melting involved in metamorphic events and can survive prolonged and repeated cycles of weathering and erosion.
Image source: The specimen originates from Pakistan. Copyright of Rob Lavinsky (https://www.irocks.com, https://creativecommons.org/licenses/by-sa/3.0/)

Given their inquisitive nature, geologists can be very persevering and meticulous in their relentless pursuit for answers. In the absence of fossils, which are preserved only in the uppermost Dalradian layers and are rather scarce, geologists found a reliable source of information in an ancient mineral, called zircon – the world’s oldest known mineral: some crystals of zircon have been around for 4000 million years, and are almost as old as Earth itself! Typically, a zircon grain is microscopic, but the information it contains is immense. Radiometric dating of zircon yields results with remarkable accuracy, so geologists now know that the sediments that would later form the Dalradian rocks originated from Laurentia.

The exact time span in which these sediments were deposited remains unknown, but this is believed to have occurred around 800-500 million years ago. The older limit is given by the Knoydartian event(s) that metamorphosed the basement on which the Dalradian Supergroup rests. The upper limit is given by a few scant fossils in the uppermost layer of the rock sequence. Geologists, therefore, believe that the deposition of the Dalradian sediments must have occurred within this time frame. The period when most of the sediments were deposited was, however, one of extensive glaciations that were so fierce Earth was reduced to a snowball; some people think that its whole surface was frozen, including oceans and equatorial regions. In such extreme conditions, the natural processes of erosion and sedimentation were halted, so breaks in the deposition of the Dalradian sediments most likely occurred.

Evidence of glaciation is preserved within a distinct kind of sedimentary rock scattered among the mostly marine Dalradian Supergroup. This is called ‘diamictite’ – a chaotic mixture of rocks and rock fragments of various sizes caught into a fine cement that were carried and deposited by glaciers. The oldest of its kind, about 720 million years old, is called the Port Askaig Tillite Formation and consists of a series of individual layers that record an astonishing number of 76 climatic episodes of glacial and non-glacial conditions. Again, careful examination of the rocks reveals that the base of each bed almost invariably records an abrupt transition from non-glacial to glacial conditions, which means that the onset of glaciers was very sudden, while the upper part of each bed almost always displays a smooth transition from glacial to non-glacial conditions, which means that glaciers melted away slowly. 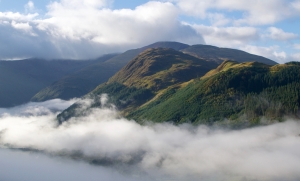 To the casual visitor of the Grampian Mountains it may seem inconceivable that the rounded summits and gentle slopes have once been comparable in size and shape to the rugged, snow-capped peaks of the nowadays Himalayas.
Copyright of Kyle Wagaman (https://500px.com/photo/174541307/, https://creativecommons.org/licenses/by-sa/3.0/)

As Earth’s surface processes were paralysed during the reign of the most severe ice ages it has ever known, its internal structure was very much alive, acting like a huge conveyor belt and driving plate tectonics. The continental remnants of Rodinia assembled into a new supercontinent, Pannotia – whose existence was so ephemeral that its break-up started before its full assemblage! The break-up caused Earth’s crust to be once again pulled apart and become fractured, causing underwater volcanic eruptions. When hot lava came into contact with water, it solidified into distinct pillow-shaped rocks, called ‘pillow lavas’. These rocks, known as the Tayvallich Volcanic Formation, are 600 million years old and preceded the opening of a new and vast ocean, called Iapetus, between Laurentia, Baltica and most of the other continental masses that had fused together to form Gondwana. The later closure of this ocean occurred after several continental collisions that led to an impressive mountain building event – the famous Caledonian Orogen.

The first phase of the Caledonian Orogen – the one that gave the Grampian Terrane its name – occurred about 480-470 million years ago and was caused by a collision between Laurentia and an island arc – a chain of volcanic islands that formed as the oceanic plate of the now-closing Iapetus ocean was beginning to subduct. The climax of this collision caused rocks to be buried, heated and melted; some of these later solidified into large bodies of igneous rock called ‘plutons’. The Grampian metamorphism was not very intense, and part of the sedimentary rocks of the Dalradian Supergroup were little changed. Deformation was intense nonetheless and occurred in four distinct episodes. The rocks were buckled and folded to such extent that the whole sequence was rearranged into the shape of a fan.

The mountain building event was followed by a long period of relative silence. The second phase of the Caledonian Orogen – Scandian – was caused by a collision between Laurentia and Baltica. This did not affect the Grampian Terrane, which was located further away from the main collision point. The distant effect of this collision, however, was the opening of faults, which facilitated subsequent large-scale magmatic intrusions.

The final closure of the Iapetus Ocean, around 420 million years ago, was followed by a substantial accumulation of magma that rose from Earth’s mantle. The magma was so hot and buoyant that part of the surrounding Dalradian rocks, which had already cooled down, suffered local, ‘contact metamorphism’, while parts of the Grampian Terrane were uplifted. In other words, the extreme heat of the magma was transferred into the surrounding rocks, whose mineral composition altered in response. Because of dissolved gases trapped inside, magma acted like a huge inflated balloon that pushed the Grampian Terrane from below, lifting it a couple of kilometres. Magma eventually solidified at shallow depth underground into a very large body of rock, called ‘batholiths’. The magmatic intrusions related to the closure of the Iapetus Ocean are called the Newer Granites, as opposed to those related to its opening, called the Older Granites. The Dalradian rocks were eroded in time, exposing parts of the batholith that now forms some of Scotland’s most iconic mountains: the Cairngorms.

A particular set of geological features encountered throughout the Grampian Terrane that have raised much interest among geologists are ‘ductile shear’ and ‘brittle shear’ zones. These are the result of a mechanic process in which rocks are stressed from opposing forces that are parallel to each other, such that layers of rock suffer a lateral shift in relation to one another. If rocks resist without breaking, this results in ‘ductile shear’. If rocks fracture, this results in ‘brittle shear’. The visual effect of ductile shear can be stunning, especially in banded metamorphic rocks, like gneiss, where patterns often resemble smeared paint.

The Grampian Terrane, despite having been studied for so long retains much of its mysterious past and will absorb and preoccupy the mind of geologists for years to come. The Dalradian Supergroup in particular appears to defy efforts to unravel its complex history. The key to deciphering it lies perhaps in the small grains of zircon and their special ability to remember events of the distant past. 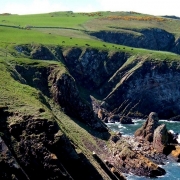 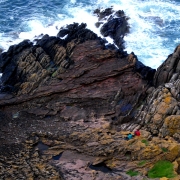 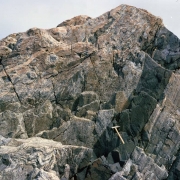 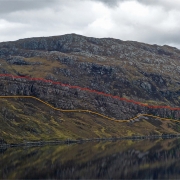 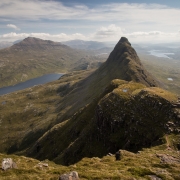