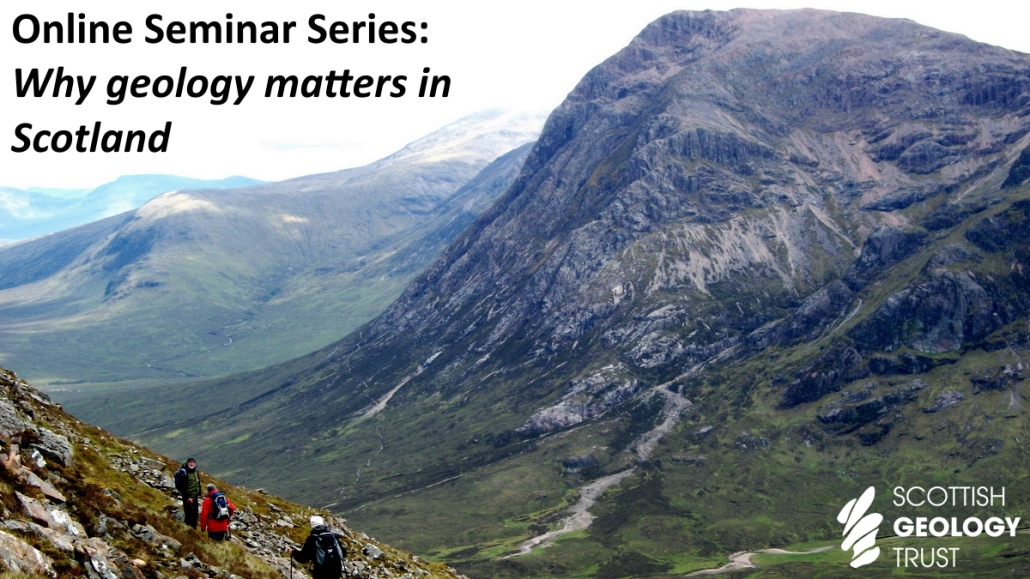 These hour-long seminars ran from August to October 2020. They included a short presentation from an expert, followed by opportunities to discuss the issue and help shape future activities of the Scottish Geology Trust.

Tuesday 4th August, 5:30-6:30pm
Landscape & Tourism, with Angus Miller, tour guide & Secretary of the Scottish Geology Trust
Scotland’s landscape is world famous and underpins the tourism industry, a significant contributor to Scotland’s economy. Obviously geology is the key factor that creates this landscape, but so what? Does it matter that this geology often isn’t particularly well understood or explained?

Tuesday 11th August, 5:30-6:30pm
Education, with Emma Smith, geography/geology teacher at Gairloch High School & Board member of the Scottish Geology Trust
What do we want our young people learning about geology in Scottish schools? We will then look at the background, examine the current curriculum and discuss workable opportunities for the Scottish Geology Trust and its members to increase the visibility, quality and quantity of geology in both primary and secondary schools.

What does Scotland’s geology have to offer universities and students as a fieldwork location? Are there other opportunities for the geological community to get involved with and support undergraduate learning? We would also like to explore the wider picture, in how universities and others can work together for mutual benefit, to encourage interest in geology, highlight the benefits that geology offers to society, and promote career pathways including undergraduate degrees in geoscience.

Colin’s presentation will provide an overview of geoconservation in Scotland from its origins to the present day, including key issues for the future. This will include a brief explanation of the different designations for geological sites of local, national and international importance. A question and answer session will follow, and open discussion on what people want from geoconservation in Scotland. 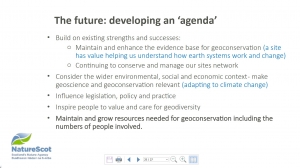 There are successful examples across Scotland of local communities working with geologists to help promote an interesting story, adding to the visitor experience and supporting peoples’ awareness and pride of their area. The Scottish Geology Trust recognises this process as being key to increasing public recognition of the value of geological knowledge. We’ll look at a couple of case studies, including local engagement with interpretation of an important fossil discovery near Stonehaven.

We’ve all heard about North Sea oil and gas, and even though it is a lot harder to see the geology beneath the seas around Scotland, there is huge geodiversity which we need to understand to protect biodiversity, manage our fishing resources, understand geohazards, and optimise use of the seabed and the subsurface for developing a green economy.

Rachel Tennant introduces the work of Scotland’s Landscape Alliance and discusses how Scotland’s landscape should be recognised as part of the critical infrastructure and solutions needed to tackle the changes required to address climate change, public health and wellbeing and inclusive economic growth.

Scotland has one of the richest legacies of traditional (pre-1919) buildings and other stone structures of any country in the world, and the most common building stones are directly influenced by the local geology of the area. Stone was not the only geological resource to be utilised; in the past, particularly before the advent of industrialised production during the 19th century, lime for building materials (e.g. mortar, plaster etc.) was predominately produced locally. This local production resulted in distinct regional variations in mortar composition and strength (hydraulicity), and crude methods of manufacture led to heterogeneous mortars with a high variability of both composition and texture. This talk will look at some of the different economic resources of the Midland Valley, and how these have been exploited for building materials throughout history, and ultimately how this has impacted the built heritage of Scotland.