News
You are here: Home1 / News2 / Uncategorised3 / Two Scottish geology sites in the list of the First 100 Geological Heritage...

Two geological sites in Scotland have been recognised by the International Union of Geological Sciences in a list of the First 100 Geological Heritage Sites. These are sites of significant international scientific relevance, making a substantial contribution to the development of geological sciences.

The two Scottish sites are Siccar Point, near Dunbar and the Moine Thrust Zone in the North West Highlands. 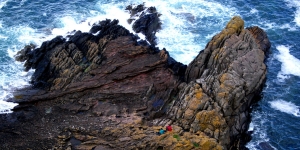 Siccar Point is a spectacular rocky promontory on the coast of the Scottish Borders, 10 miles south-east of Dunbar. It is commonly recognised as the most important geological site in the world. Siccar Point was first described in 1788 by James Hutton and his friends as an example of an angular unconformity – a junction between two sets of rocks of different ages. Hutton’s descriptions of these rocks revolutionised science – providing a first glimpse of “deep time” and the great cycles in earth history. Siccar Point is widely regarded now as one of birthplaces of the science of geology and Hutton as the science’s father-figure. Although the site is little known locally, it has inspired scientists and students for centuries – and fundamentally changed the way we see the Earth. 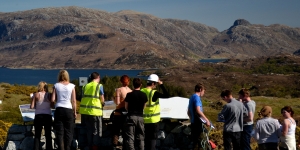 The Moine Thrust Zone is a major tract of ancient tectonic faulting where rocks have been moved more than 100 km sideways. It can be traced from Cape Wrath, on Scotland’s north coast south to the Isle of Skye, and constitutes not only the centrepiece to the NW Highlands UNESCO Geopark but also its landscapes are the highlight of the NorthCoast 500 tourist trail. Recognised in the 19th century, the Moine Thrust Zone revolutionised the ways geologists developed tectonic understanding of ancient and modern mountain ranges around the world.

Prof Robert Holdsworth (Chair of the Scottish Geology Trust) said: “There is a very strong argument that says that the science of geology came into being from observations first made in Scotland. These are places where humankind made gigantic conceptual leaps forwards in our understanding of Earth processes and the passage of geological time. Such extraordinary and visually captivating localities are an inspiration to current and future geoscientists worldwide and are the centrepiece of what makes the rocks of Scotland so special.”

Professor Iain Stewart (UNESCO Chair in Geoscience & Society, Scottish geologist & BBC documentary maker) said: “Siccar Point is a sacred pilgrimage place for geologists the world over – an apparently unassuming rocky foreshore in which the full enormity of geological time is laid out in the tilted strata of the planet’s natural convulsions. The Moine Thrust Zone gave geologists a new way of seeing how mountains formed – slices of ancient strata, stacked up on top of each other, creating Himalayas-scale peaks that have been worn down to their roots.”

The Scottish Geology Trust welcomes the inclusion of two important sites in the First 100 Geological Heritage Sites; we are working to promote these sites and Scottish geology, and to highlight the opportunities for internationally recognised sites to contribute to local economies. The Trust works to raise awareness of UNESCO Global Geoparks in Scotland, and their potential contribution to achieving Scottish Government outcomes for National Parks, Regional Land Use Partnerships and green jobs.