A recent survey carried out by researchers from England and Slovenia has charted the invertebrate animals living in thirty-two caves distributed across Scotland. 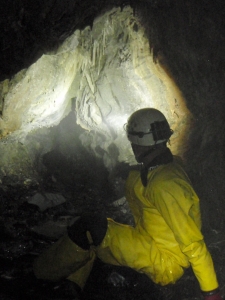 Although surveys like this have been carried out for the rest of the British Isles, this was the first of its kind in Scotland.

Between 2015 and 2021, the researchers sampled streams, sumps and pools within the caves, using sweep or kick sampling and pond-nets. The sites in this study included the famous Smoo Cave in Sutherland, and others across Assynt, Wester Ross, Skye, Argyll and in Perthshire. The longest caves sampled were those in the dolomitic limestones of the Durness Group (more than 1km in length), and they also sampled some of the more than 150 caves found in the Neoproterozoic Dalradian Supergroup metalimestones, the longest being near Appin. 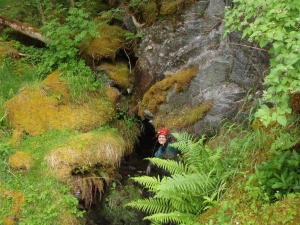 Researcher Dominika Wroblewska at the entrance to Uamh an Tobair Dhuibh, in Appin. Photo by Lee Knight.

Their results were impressive, finding over 130 different species within cave systems, the majority of them in Assynt, Appin and Skye.
Most species were stream dwellers washed into the caves from above ground, which was no surprise: thanks to our copious rainfall and the often steep rough landscape, Scotland’s caves experience a healthy throughput of water either by inflowing streams, or percolating drips from the rocks above.
These species included dragonfly nymphs and caddis fly, but the team also encountered water crickets, aquatic snails, pea mussels and crustaceans. 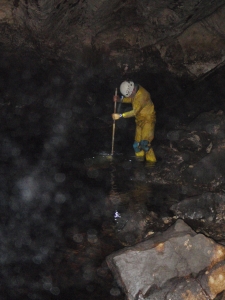 Species that live entirely below ground are known as stygobitic, and it is thought that stygobitic species of crustaceans in the UK either recolonised our caves following their extinction during the ice ages, or were able to survive beneath the ice sheets, and subsequently dispersed.

Entirely subterranean crustaceans have been found in other parts of the British Isles, but excitingly one of the ostracod species found in this study, in Allt nan Uamh Stream Cave and Smoo Cave, could be the first record of this particular stygobitic species in the British Isles.

To read more about this study and the results, take a look at the paper by Knight et al. 2022.