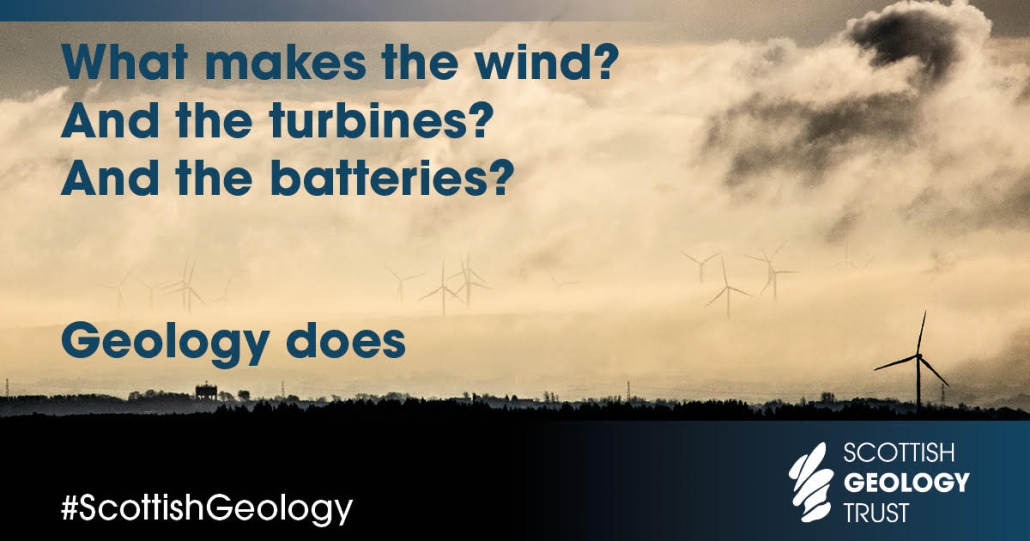 What makes the wind?
And the turbine?
And the batteries?
Geology does

Geology is essential to Scotland’s renewable energy – from the raw energy of the wind, to the process of converting that to electricity, to storage, to delivering it to homes and businesses.

Scotland’s location at the edge of Europe creates a high potential for wind energy through air and ocean currents. That wind power is converted to electricity via a wind turbine, distributed through the national grid and stored in batteries. Making and using the electricity uses many different metals, found by geologists and extracted from the ground by mining and quarrying.

Wind is formed by air currents that owe their origin to tectonic events from millions of years ago and thousands of miles away. The Atlantic Ocean’s Gulf Stream brings warm air and wet and windy weather to western Scotland. It formed after volcanoes created a chain of islands between North and South America, eventually merging to form the Isthmus of Panama in the last 10 million years. The isthmus stopped water from flowing between the Atlantic and Pacific Oceans, allowing heat to build up in the waters of the Caribbean. This warm water started to flow north through the Atlantic Ocean, creating the Gulf Stream, which exerts a strong control on the weather and climate of eastern North America and western Europe.

That wind is converted to electricity via wind turbines – large steel structures with rotating parts that drive a generator. Copper is a key component of generators. It’s also an important part of the high voltage cables that conduct the electricity from the turbine into, through, and from the national grid, where it can be used by homes and businesses. When electricity is needed at times or places when mains electricity isn’t available, batteries can store electricity and release it when needed. Batteries are used everywhere and at all scales, including hearing aids, toys, mobile phones, computers and electric vehicles. They will need to become an integrated part of the national grid as power generation moves from on-demand, fossil fuel sources, to more intermittent renewable sources of power. There are many different battery types, and lots of different metals needed to make them, including lead, nickel, lithium, cobalt, zinc, and manganese.

All of these metals, including iron for steel used in wind turbines, come out of the ground, extracted by mining of metal ores. Where global demand for certain metals is likely to exceed supply they are known as “critical metals”. More sources need to be found quickly to allow a green and globally equitable energy transition. Well-trained and experienced geologists are essential for this, both for finding new deposits of metal ores and for finding ways to extract the metals more efficiently from existing material.

‘blowing a hoolie’ reportedly derived from the Orkney Scots word “hoolan”, a very strong wind.
‘beginning to kittle’ the wind is beginning to rise.

The Role of Critical Minerals in Clean Energy Transitions