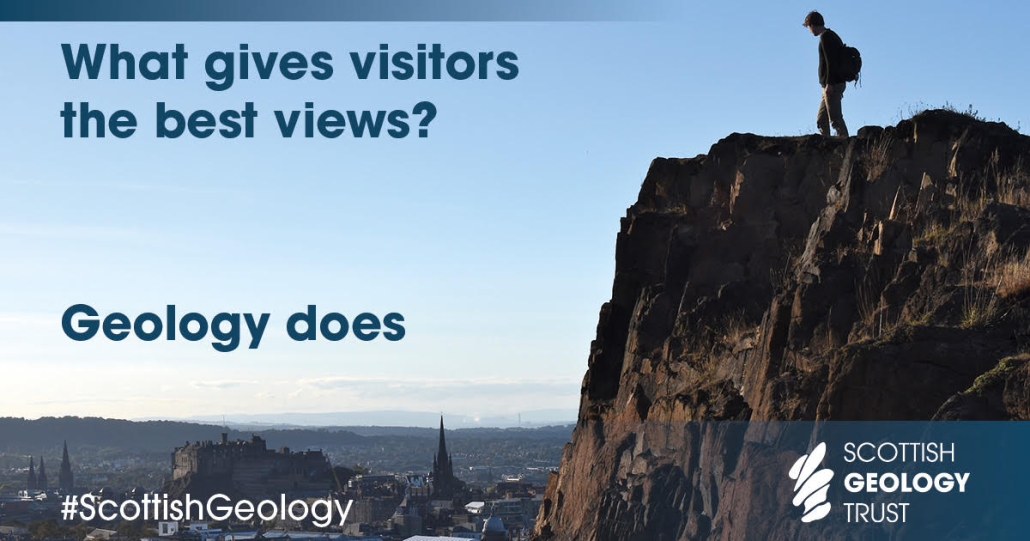 What gives visitors the best views?
Geology does

With a mix of rock types formed in various episodes over 3 billion years, Scotland’s geology has many points of prominence for peerless panoramas.

Find out more about the amazing variety of Scotland’s geology – including top spots for viewpoints throughout the country – at ScottishGeology.com.

Salisbury Crags is a prominent outcrop of tough igneous rock in Holyrood Park, close to Edinburgh city centre. Although it lies next to the Arthur’s Seat volcano, the cliff was formed by an entirely separate geological episode when rising magma was trapped underground to form a sill intrusion.

A clear day offers views to Ben Lomond, Ben Ledi, Fife’s Lomond Hills and the East Neuk, the bridges and islands of the Firth of Forth (including Bass Rock), and North Berwick Law. It’s the best place to take in the shape, spread and landmarks of Scotland’s capital city, too.

Edinburgh is a city of hills (7, count them) and expansive vantage points, each with a character shaped by a mix of igneous and sedimentary rock. A range of volcanic processes and intrusion of magma between 410 and 330 million years ago – along with hundreds of millions of years of sculpting and erosion – has resulted in a unique urban landscape renowned throughout the world for its geological heritage.

‘a hill for magnitude, a mountain in virtue of its bold design’ Robert Louis Stevenson, 1879, about Arthur’s Seat & Salisbury Crags

Find out more about Edinburgh’s geology from the Edinburgh Geological Society.

Holyrood Park is included in the list of 51 Best Places to see Scotland’s Geology.

The geology infographic (free to use) featured on this Urban Nature map of Edinburgh shows a timeline and impact of geological processes. (Infographic credit: Urban Good, Rob Bushby, Angus Miller).