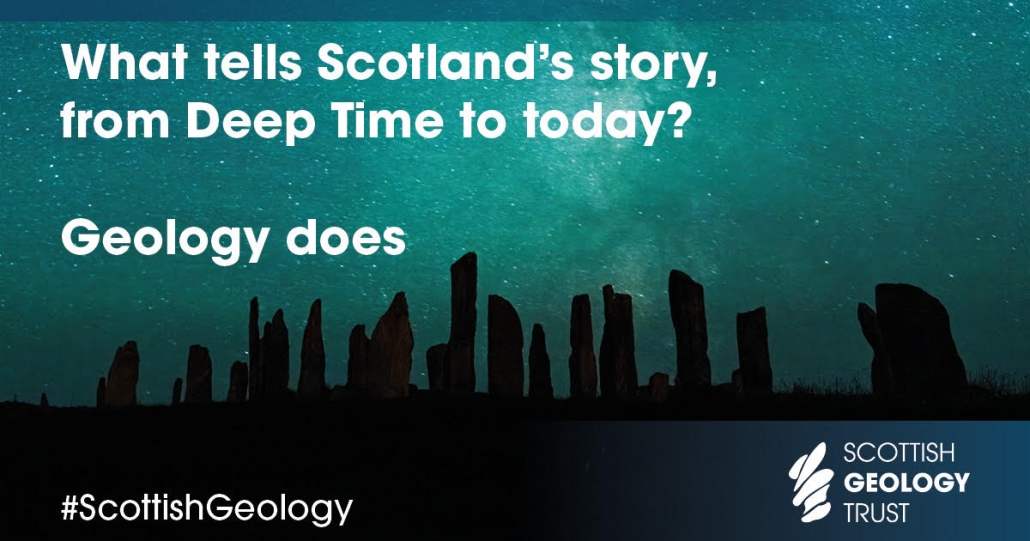 What tells Scotland’s story, from Deep Time to today?
Geology does

Scotland’s rocks capture and share a story of 3 billion years of change.

The oldest rock in Scotland is the Lewisian gneiss. Found in the Outer Hebrides and the north west Highlands, it’s a spectacularly altered metamorphic rock that started forming 3,000 million years ago. By contrast, still within the Hebrides archipelago, the geology of the Isle of Skye includes volcanic rocks less than 60 million years old.

The Calanais Standing Stones, on the Isle of Lewis, is a remarkable cross-shaped grouping of monoliths positioned 5,000 years ago. Each stone is a large piece of Lewisian gneiss that’s neither quarried or sculpted, but is naturally shaped by erosion and ice. Each stone captures a story over a vast timescale: from the formation and alteration of the original rock in processes stretching over hundreds of millions of years; through a long period of quiet repose in stable continental crust; gradually surfacing as overlying mountains wore away; then each piece breaking from the bedrock, being moved and further fashioned by ice.

Subjected to immense tectonic pressures and baking temperatures, these rocks relate Scotland’s early history of continental collision and separation. They tell us that this piece of crust spent much more time attached to North America than to what is now Europe.

In recent times (at least on a geological rather than human scale) 13 monoliths were discovered, exhumed and positioned as part of a wider ritual landscape. They remained a ceremonial centrepiece throughout the Bronze age and offer insights into ancient traditions over a time span of 3,000 years. Remarkably, the geological story doesn’t stop there. Stones were subsequently partially buried in peat, before being exposed again in 1857.

“At its best, a deep time awareness might help us see ourselves as part of a web of a gift, inheritance and legacy stretching over millions of years past and millions to come, bringing us to consider what we are leaving behind for the epochs and beings that will follow us.” Robert Macfarlane

The geology of the Calanais Standing Stones (The Geological Society).