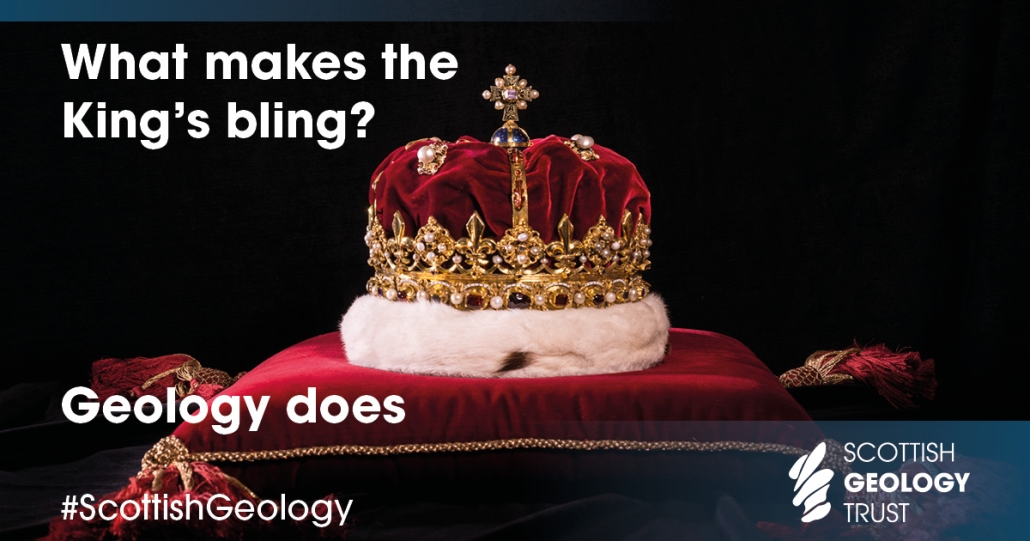 What makes the King’s bling?
Geology does

The Crown of Scotland has 43 gemstones including diamond, garnet and amethyst. It was remodelled in 1540 with the addition of 41 ounces of Scottish gold.

The Honours of Scotland include the Crown of Scotland, the Sceptre and the Sword of State. The sceptre and sword were made in Italy and gifted to the Scottish Royals. The crown was made from a previous crown, reusing some of its gold and stones, but the base circlet is made from Scottish gold, probably mined at Crawford Moor in South Lanarkshire.

The crown is studded with precious stones including diamond, garnet and amethyst, blue enamelling and a plethora of pearls. Some of the larger pearls are from overseas, but all the smaller ones are Scottish freshwater pearls, probably from Loch Tay. Scotland is home to more than half of the world’s population of freshwater pearl mussels. They live in the beds of clean, fast-flowing rivers, where they can be buried partly or wholly in coarse sand or fine gravel. A critically endangered species, pearl mussels were dying out in Scotland at an alarming rate until they were granted legal protection in 1998. While fishing them is now illegal, they are still under severe threat due to climate change, water pollution and illegal pearl collecting.

Scotland has a long history of gold prospecting and today Scottish gold demands a premium price. It’s hard to find, but people snipe for gold in rivers or pan for it at locations such as Wanlockhead and Helmsdale. The Douglas Nugget, found in 2017 and now at The Hunterian in Glasgow, was the largest gold nugget found in the last 400 years. Weighing 85g, it has been transported from its bedrock by water, becoming smooth and rounded by tumbling against other pebbles. It probably originally grew in rocks which were fractured and altered by hot mineralising waters about 400 million years ago.

Scotland’s only working gold mine is at Cononish, Tyndrum. Production commenced in 2020 with 60 people employed by Scotgold at the mine. The gold is found within the Dalradian metamorphic complex as a result of a long sequence of geological events, including mountain building, injection of magma, and circulation of hot fluids deep within the crust. The gold is found in quartz veins associated with faults. It is mined as native gold, but mostly as electrum, an alloy of gold and silver.

Do you know about gold?
It feeds no one; aurum, soft, untarnishable; slakes
no thirst.

Image: The Crown of Scotland
by Historic Environment Scotland

The Honours of Scotland are the oldest regalia in the British Isles. The crown, the sword and sceptre date from the late 15th and early 16th century, during the reigns of James IV and James V, the grandfather and father of Mary Queen of Scots.

Gold occurrences and history of gold exploration in Scotland by Dr Taija Torvela, online talk for the Scottish Geology Festival.