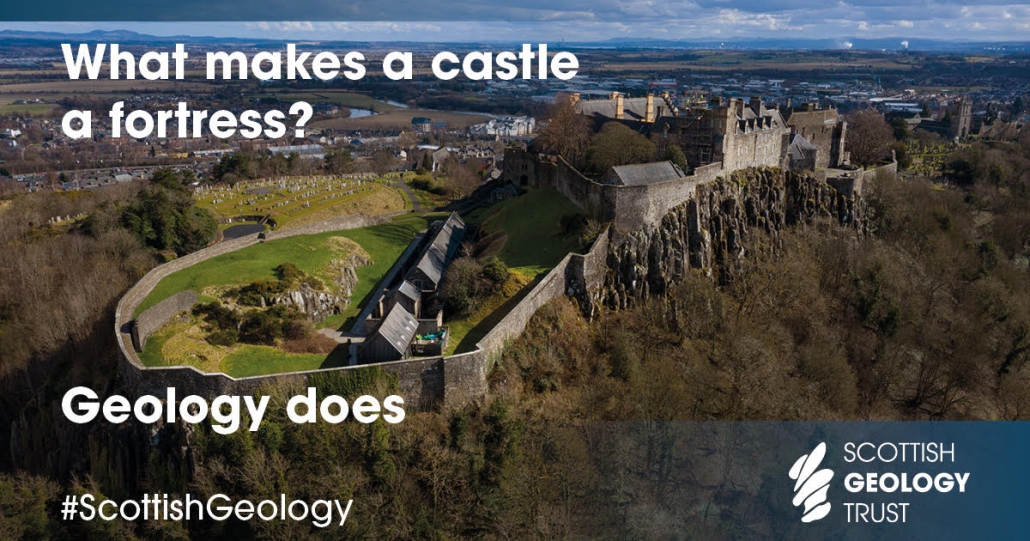 What makes a castle a fortress?
Geology does

Stirling Castle sits on top of a sheet of frozen magma – ideal geological ramparts for one of Scotland’s most important castles. This prominent outcrop of tough igneous rock is surrounded by some of Scotland’s flattest land. It is this contrast in landscapes, drawn from the underlying geology, that creates the castle’s impressive setting and makes it visible from far distances.

The igneous rock is called quartz dolerite. It formed 300 million years ago as part of a huge body of magma stretching east towards the North Sea. The magma was injected sideways into layered sedimentary rock, deep underground. This formed a series of interlinked pods that created many of the isolated crags found around the upper Firth of Forth today, including at North Queensferry, Benarty, Binny Craig and three of Stirling’s hills – Castle Hill, Abbey Craig and The Homesteads.

Many, but not all, of Scotland’s fortified castles built in the Middle Ages rely on a mix of rock types to create their landscape setting. The varied, intricate geology of Scotland often creates small and isolated crags where softer surrounding rock has been eroded away. The scale of this variety derives directly from a long and messy geological history. In many parts of the country the underlying rock type varies over a distance of a few hundred metres, particularly in the central belt, creating small crags with steep faces, surrounded by flat land. For fortified sites they look impressive, are easy to defend, and crucially, are often easy to access, suitable for everyday use.

‘So let us pass on with our travelling design to the ports of Sterling; where stands a beautiful and imbellished Castle, elevated on the precipice of an impregnable rock, that commands the vallies (as well as the town) and all those habitable parts about it.’ Richard Franck, 1658, Northern Memoirs

Find out more about the amazing variety of Scotland’s geology at ScottishGeology.com.