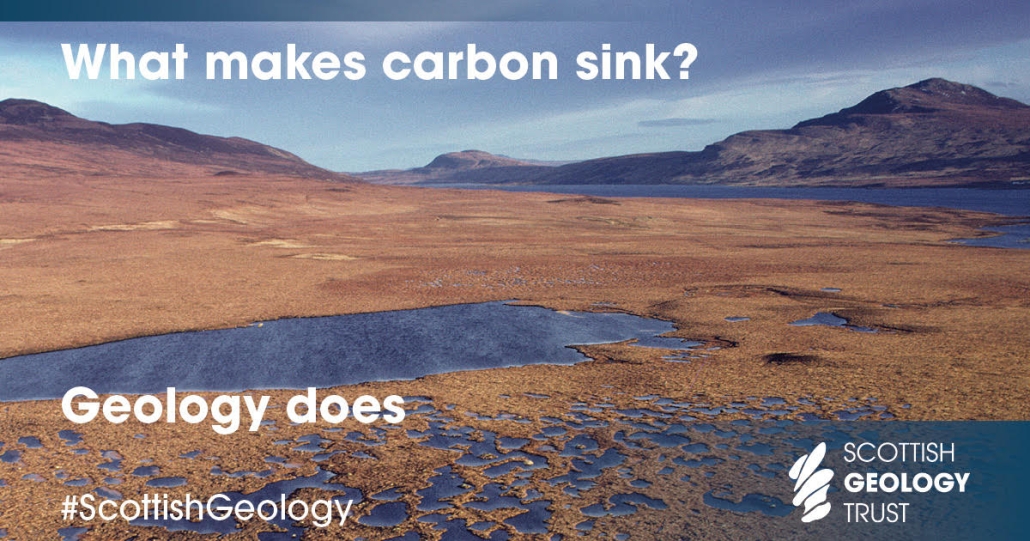 What makes carbon sink?
Geology does

Scotland’s peat bogs store 1.6 billion tonnes of carbon. But over 80% are degraded.

Scotland hosts many opportunities to keep CO2 out of the atmosphere from peat bogs, storing a whopping 1.6 billion tonnes of carbon, to developing large-scale underground storage. But over 80% of peat bogs are degraded, with an urgent need to protect and restore them to ensure that carbon stays locked away and doesn’t get released into the atmosphere.

The Flow Country, Caithness, is a large area of blanket bog in northern Scotland that holds over 400 million tonnes of carbon. Thousands of years old and up to 5 meters deep in places, it might become the world’s first peatland World Heritage Site.

While peat bogs might be a hillwalker’s nemesis, often resulting in soggy feet, they are incredibly important systems that promote biodiversity and can influence global climate. Peat bogs sit at the intersection of biology, geology and ecology. They can be tens of thousands of years old, locking up CO2 over geological timescales like no other biological system can.

Scotland’s peat bogs cover almost one-quarter of the country and store around 1.6 billion tonnes of carbon, equivalent to 140 years of Scotland’s CO2 emissions. Damage, degradation and drying out means a high proportion are slowly leaking carbon back to the atmosphere – carbon that might have been stored for ten thousand years. Protecting and restoring peatland is a vital part of emissions mitigation.

When it comes to storing carbon to prevent climate breakdown, the longer the timescale the better. By burning fossil fuels, we are releasing CO2 that was removed from the atmosphere millions of years ago. Ideally, carbon storage needs to work over this same timescale, otherwise we are delaying rather than preventing extreme global warming. Technology exists to capture CO2 at the point of emission and pump it deep underground, where it can stay locked away for millions of years with very low risk of leakage. This is carbon capture and geological storage (CCS). The rocks beneath UK’s North Sea contains enough potential CO2 storage sites to hold 200 years’ worth of the UK’s CO2 emissions, and 75% of that storage is in Scottish waters. CCS has been slow to become established, mostly because of uncertainties about who should pay for it and a lack of political will. Scotland has been a consistent leader in CCS research and innovation, however, and is on track to establish an offshore CO2 storage facility expected to be storing up to 10 million tonnes of CO2 per year by 2030 (Acorn carbon capture). To illustrate the challenge ahead of us though, modelling scenarios that use the most CCS require the equivalent of 1500 projects the size of Acorn (in 2030) to keep global warning below 1.5ºC.

How can’t you see
The wilderness growing free
Time wounded and scarred
Stroking away the years Runrig, Skye

‘Restoring our peatlands is a huge win for Scotland’, Scottish Government