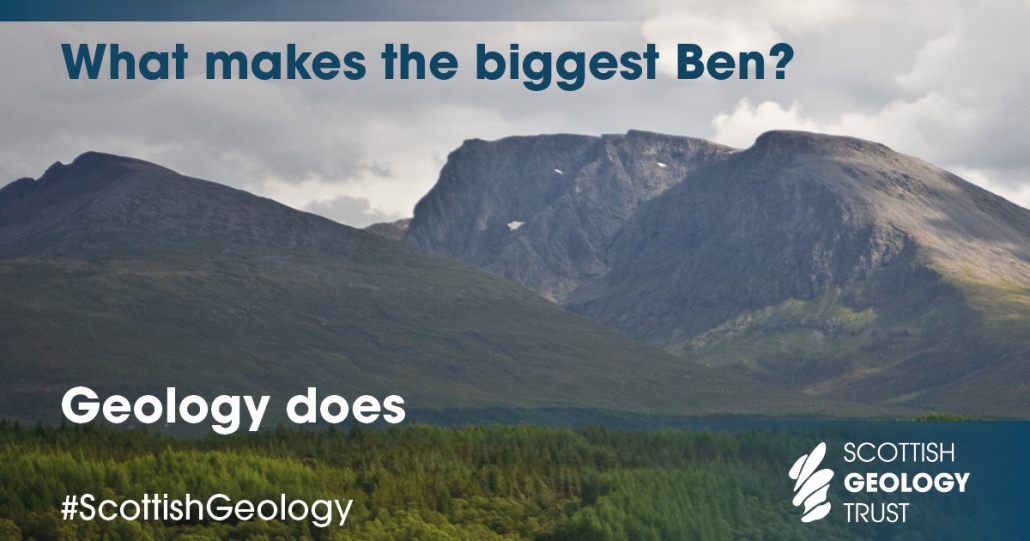 What makes the biggest Ben?
Geology does

Ben Nevis has a fascinating tale to tell about exploding volcanoes and rising magma around 400 million years ago. It captures the end stages of the great creation story of Britain, when different continents came together to create the Caledonian mountains and the mix of rocks across much of the Highlands and Southern Uplands. But it also demonstrates how ideas change with new research, and that there’s always something to learn, even about Scotland’s most famous mountain.

In common with almost all of Scotland’s highest mountains, Ben Nevis has a granite core. Wherever we find granite in Scotland, from Galloway to Shetland, it tends to make high ground because it survives better than most other rocks. What is unique about Ben Nevis is its pile of surface volcanic rocks. Originally classified as lava flows, recent research suggests something even more exciting – that the rocks of the north face and summit are mostly the result of vast explosive volcanic eruptions from a source to the north-west. Rather than being a volcano in its own right, the top part of the Ben consists of surface volcanic material, remnants of an immense nearby volcano. Once it stopped erupting, magma later welled up beneath this volcano to form hard intrusive granite and diorite underneath.

The granitic and volcanic structure of Ben Nevis is in stark contrast to neighbouring mountains such as the Mamores. These are formed of older Dalradian metamorphic rocks that originally formed as sediment on an ocean floor, later contorting and uplifting to create the Caledonian mountains.

The geological background of these mountains, and the rest of the Highlands, is a complex mix of processes and rock types that plays out in high ridges and even higher plateaux.

The first recorded ascent of the Ben was in 1771 and its status as the UK’s highest peak wasn’t confirmed by the Ordnance Survey until 1847. Since then it has secured its place as a significant climbing challenge partly because the ascent starts from near sea level.

Ben Nevis is from the Gaelic ‘Beinn Nibheis’: venomous or malicious mountain’ (‘nibheis’ is understood to have several meanings). Another interpretation derives from ‘beinn nèamh-bhathais’, from the word nèamh meaning ‘heavens or clouds’ and bathais meaning ‘top of a man’s head: literally, ‘the mountain with its head in the clouds’ or the more poetic, ‘mountain of heaven’.