Why our cause matters

You are here: Home1 / Why our cause matters

Why our cause matters: a walk in Glen Roy

When I was at school, Glen Roy was widely known by those studying physical geography because of its ‘Parallel Roads’: three strange, perfectly level lines on the valley sides that can be traced continuously for many miles.  Today it’s just another Scottish glen, little known and rarely visited outside the Quaternary geology community. For the rare tourist who dares the switch-backs and hair-pin turns of the single track road, they discover an empty glen of stunning beauty, rich in history and culture. A place where you can more or less guarantee you’ll be alone apart from the odd sheep, yet only a few miles from Spean Bridge.

A stone, not far from the entrance to the Glen, marks the site of the battle of Mulroy, the last Clan battle fought in Scotland, on August 4th, 1688. Set against a background of far greater events such as Monmouth’s rebellion, Argyll’s Rising and the Glorious Revolution, this was a purely personal feud over land that pitted 2 armies totalling more than 2000 men against one another. In a nutshell, the MacDonalds of Keppoch believed they held a portion of land by right of ‘long occupancy’, while Clan Mackintosh held a ‘parchment title’ to the same land, a relic of the feudal system. In the wild west of Scotland, where the rule of government was forever thin, Lachlan Mackintosh was given a ‘writ of fire and sword’ to recover the land. The resulting battle between the MacDonalds and their allies the Camerons, with the Mackintosh’s aided by a troop of Government soldiers, left Lachlan Macintosh an inconvenient prisoner of the MacDonalds and the remains of the Government forces, scampering back to Inverness. In the long run this led to the establishment of a government fort at Fort William.

Further up the Glen, past the some of the old crofts and beside the road, the visitor will find a Communion or Mass Stone. The stone has a carved communion chalice inscribed on its west face. It is said to have been used for Catholic masses at times of persecution. Although the authenticity of the stone has been questioned it points once more to the troubled history of this region.

Continuing up the glen you eventually reach a large but rough car park with a view to the north east up the valley. A wild, empty vista unfolds, populated by the odd sheep.  On the edge of the car park is a plinth erected by Lochaber Geopark with an excellent explanation of the view. You will see a typical glacial U-shaped glen with an incised river in its base. The valley itself is carved out of a tight syncline made from metasediments of the Grampian and Appin Groups  that form part of the Precambrian Dalradian supergroup.  In the stream bed, particularly near the bridge above Brae Roy Lodge, parasitic folds can be seen.

On the hillside on both sides of the valley, three perfectly horizontal terraces at 350m, 325m and 260m are picked out by the vegetation, the famed ‘Parallel Roads of Glen Roy’.  As every geography student in Scotland once knew, these represent successive shorelines of an ice-dammed lake. They extend up the valley beyond Brae Roy Lodge and into the surrounding glens, including Glen Turret and Glen Gloy. It is possible to see the terraces in Glen Gloy from the northern bank of Loch Lochy in the Great Glen, between Gairlochy and Achnacarry.

In Gley Roy, one of the terrace can be reached by a sharp climb from the car park. They are horizontal benches a few metres wide cut into the hillside. Below the turf, the remains of a gravel beach is sometimes present.  The large ice-dammed lake formed some 12,165 years ago during a time called the ‘Younger Dryas’ (or the Loch Lomond Stadial). An abrupt return to glacial conditions resulted in a small ice cap over the west of Scotland that expanded eastwards. This, the last throw of the Pleistocene Ice Ages, lasted from about 12,800 to 11,600 years ago, with a maximum extent between 12,700 and 12,500 years ago. 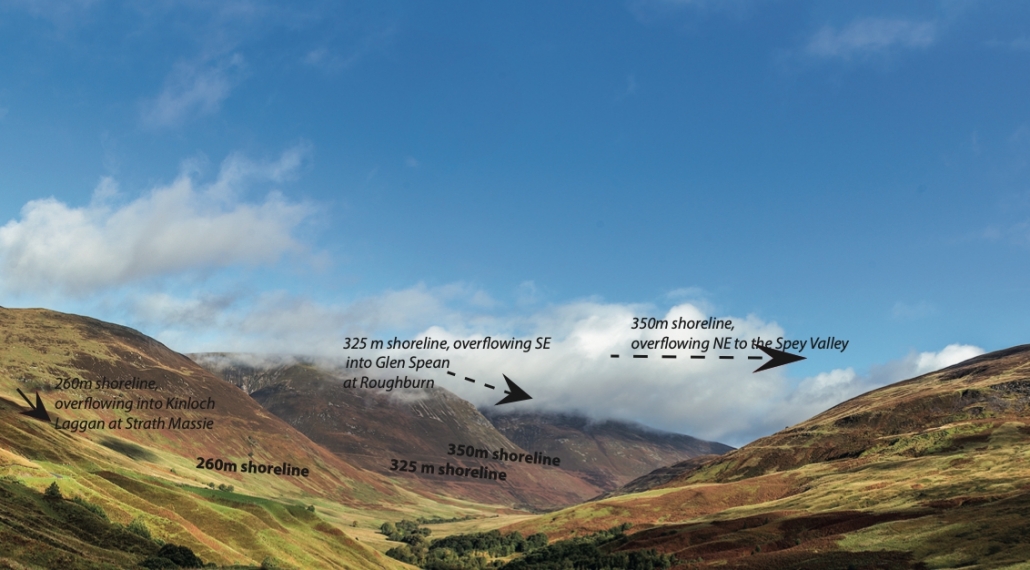 Ice advancing up Glen Spean and north eastwards along Loch Lochy 12,160 years ago, created an ice-dammed lake in Glen Spean and Glen Roy. Water trapped behind the advancing ice front built up in a lake whose shoreline became the 260m ‘Parallel Road’. Although stable for nearly 200 years a further ice advance blocked Glen Roy at 325 m, resulting in the lake deepening until it could overflow beyond the mouth of Gleann Glas Dhoire. A final ice advance into Glen Roy caused the depth of the lake to increase until its surface stabilised at 350m when water overflowed NE-wards into the Spey valley.

The retreat of the ice back down Glen Spean resulted in the shorelines lowering over approximately 100 years. The process of filling and emptying the Glen Roy lake took a minimum of 515 years. Finally, the ice dam collapsed catastrophically, releasing huge volumes of water down Glen Spean, resulting in its spectacular gorge. 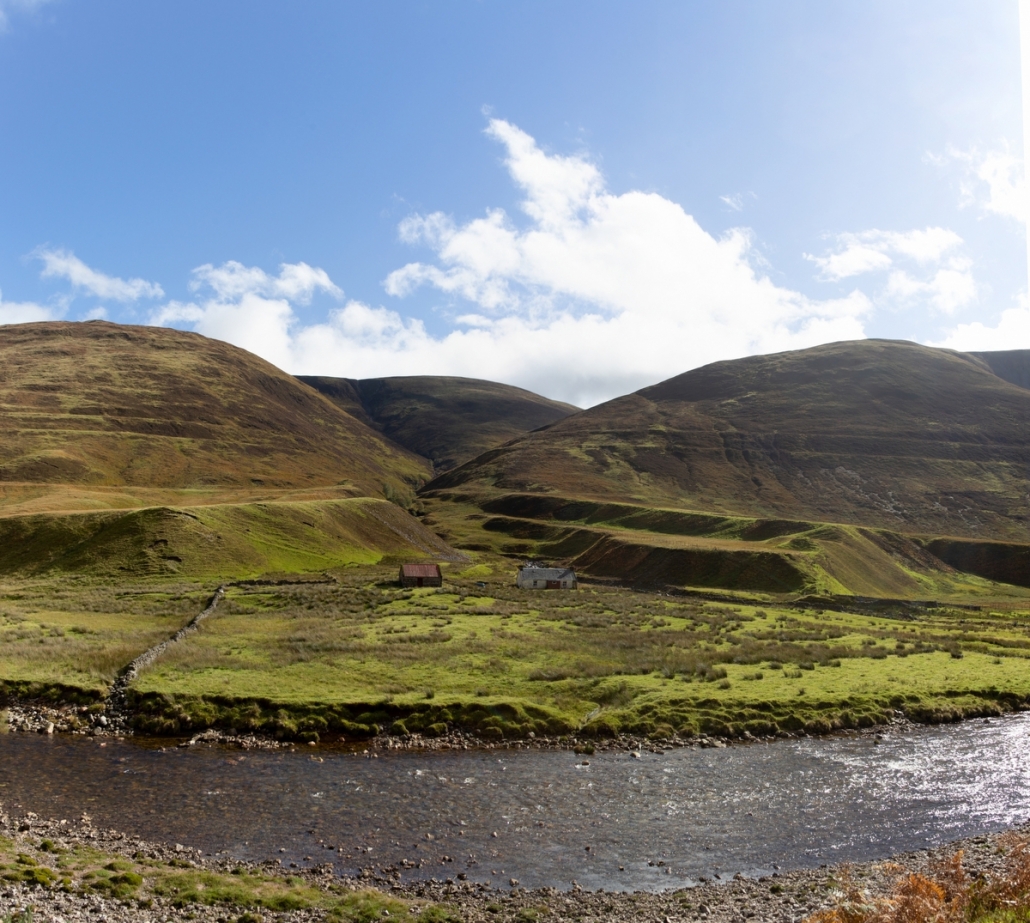 Travelling further up Glen Roy the valley has a growing desolate beauty. As you travel toward the end of the road you pass the Brunachan Fan, on the south side of the valley, one of several alluvial fans emptying into the glacial lake.  If you follow the line of the streams feeding the fans up the side of the Glen you will see that the Parallel Roads ‘V’ into the little valleys in which the streams run. This tells us that the shape of the valley and the drainage pattern existed before the valley was flooded and the Parallel Roads formed.   Beyond the end of the tarmacked road lies Brae Roy Lodge. A short walk beyond it is the Turret Fan, the most spectacular of the alluvial fans emptying into the Glen Roy glacial lake. Climbing to the top of the fan, you can see that the parallel roads extend into Glen Turret and Glen Gloy. On the opposite side of the valley, river terraces can be seen that result from isostatic rebound following unloading of the ice.

Glen Roy is at its most attractive at the Turret fan and beyond. The Parallel Roads continue up the glen. A good walk following the river brings you to the watershed between the River Roy and the River Spey, whose waters support much of the Scottish whisky industry. 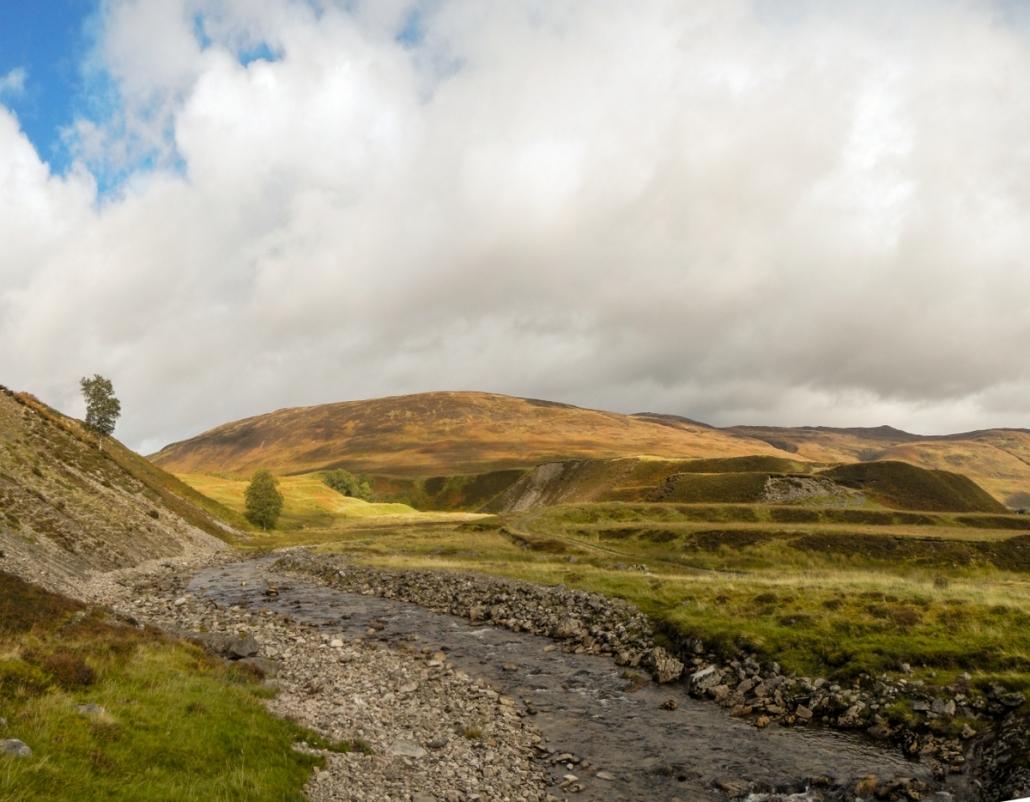 With its history, unique geology and desolate beauty you might be mistaken for thinking that this is a much visited glen with lots of information readily available. It’s not any of that. It is instead a place where you can get away from virtually everybody.

Lochaber Geopark has placed two explanatory panels in the car park referred to above, and have published an excellent pamphlet on Glen Roy. The Geopark developed an attractive visitor centre at Roy Bridge that explained the features to see in Glen Roy and the history of its interpretation, including Charles Darwin’s incorrect interpretation that the ‘roads’ were of marine origin and represented changes in sea level. Unfortunately the visitor centre has had to close as funds ran short for Lochaber Geopark. Now they may even lose their Fort William visitor centre. With 30,000 visitors a year to the Fort William visitor centre, one can be forgiven for thinking that keeping that open would be easy, but sales over the year are barely adequate to pay rent and basic operating costs, and insufficient to support a paid member of staff.

Part of Glen Roy, including sections of the Parallel Roads, is a National Nature Reserve managed by Scottish Natural Heritage (SNH). In recent years that status has been under discussion as its not your typical nature reserve. Preserving and promoting geological features of international importance is not a priority for SNH. Although that discussion is now finished, funds to develop Glen Roy are absent. With few sheep now grazing the glen there is a danger that the Parallel Roads themselves will disappear under bracken.