Heritage Geology – The Limestones of Moray

You are here: Home1 / Heritage Geology – The Limestones of Moray

Heritage Geology – The Limestones of Moray

Morayshire has a poor limestone resource, at least when compared to neighbouring Banffshire, and many other parts of Scotland.  So, in the 18th and 19th centuries, when locally sourced lime was highly valued for agricultural improvement and building materials, there was intense exploitation of the sparse outcrops that existed.

The Morayshire limestones are somewhat enigmatic, being unusual in origin, i.e. not the usual lagoonal depositional setting that characterises large limestone deposits e.g. Banffshire, central Scotland and the Pennines of northern England.  The modern analogue of such lagoonal deposition is found in the Bahamas. 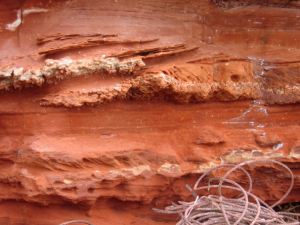 Instead, the Moray limestones are historically termed “cornstones”, or in current geological terminology “calcretes” or “caliches”.  These are pedogenic or soil-forming deposits.  In an arid desert environment, a land surface exposed for an extended period, many thousands of years, will form a soil horizon at surface.  Sporadic heavy rainfall will penetrate deeply, and over the dry periods these ground waters will be drawn back up to evaporate, but carrying with them, in solution, carbonates and other minerals from the deep subsuface.  Thus a significant concentration of calcium carbonate can arise in the soil.  Subsequent burial by further deposition leads to calcrete formation as part of the diagenetic or rock-forming processes.  The modern analogue of such processes is in the deserts of western USA where these soil formations are termed caliches.

In this article, I consider both the Devonian (Old Red Sandstone) cornstones, and the Triassic calcretes/silcretes, known locally as “the Cherty Rock”. A really good example of such calcrete formation within the Old Red Sandstone can be seen on the shore at Milton Ness, just north of St Cyrus in Angus.  Fig 1 shows a small section.  Here again it was considerably exploited for limestone, serving several large kilns along the Angus coast. 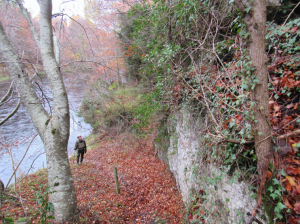 Figure 2: The riverside locality at Cothall

So, in the Elgin and Forres districts we have these cornstones within the upper Old Red Sandstones.  There is a zone running SSW from the Boar’s Head Rock, east of Lossiemouth, to Mayne Woods, just west of Elgin Golf Course.  It is apparently abruptly terminated by a splay of the Rothes Glen fault, although similar rocks appear further west again at Cothall Quarry, a kilometre or so SW of Forres on the right bank of the River Findhorn.  These limestones will be of the order of 370 million years old, in the late Devonian period.

Nearer the coast there are further calcrete occurrences, but this time in Triassic rocks of some 200million years age.  While the diagenesis is broadly the same process, the result is much more variable in that there can be a “silcrete” rather than a “calcrete” or anything in between.  If the rising fluids are silica concentrates rather than carbonate, then we get a silcrete formation. Thus we have the Cherty Rock of Stotfield outcropping near Inverugie, a kilometer south of Hopemen where limestone was quarried, burned and exported by railway to Hopeman harbour, and at Stotfield where the rock is primarily a silcrete, or a chert liberally infused with drusy quartz crystals and galena (lead sulphide).

Investigation across the Moray Firth at Golspie (Batten et al, 1986), where the same Triassic sequence occurs, has demonstrated that the Cherty Rock represents the top of the Triassic, being superseded above by now proven lower Jurassic Dunrobin deposits.  There is borehole evidence in Moray of the lower Jurassic, but always in faulted blocks, and nowhere seen deposited directly on the chert. Another minor locality has been mapped in the old surveys at Spynie Palace.  Here the modern maps confirm a faulted outcrop of Cherty Rock, with Triassic Lossiemouth Sandstone below and Jurassic Dunrobin Bay Formation above (not exposed – determined by borehole drilling).

Thus the Cherty Rock has become an important stratigraphical marker at the Triassic-Jurassic boundary, particularly in the offshore Moray Firth hydrocarbon basin. 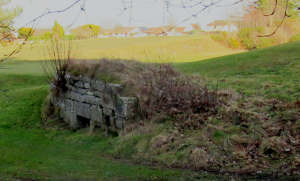 Figure 3:  The kiln and quarry (beyond at right) at Elgin Golf Course

The Elgin Calcrete Formation, as now named by the British Geological Survey (BGS), outcrops to the east and south of Elgin.  The late 19th Century geological survey shows cornstone outcrops at Stonewells and Nether Meft near Innes House.  Then a larger outcrop from south of New Elgin across to Mayne Woods, is mapped, together with minor outcrops at Waulkmill (Pinefield) and Pittendreich to the west of the River Lossie.  The reported exploitation (Robertson et al) describes quarrying at all these localities (analysed at 88.5% CaCO3 at Stonewells), but more recent surveys (Peacock et al) indicate poor or non-existent exposure now.

Research using the mid 19th century 6” OS maps shows significant quarrying and limekilns now under housing in south New Elgin, quarrying on what is now Elgin Golf course and at Mayne Wood, with a limekiln.  Site visits have confirmed the quarry on the golf course at [NJ 2149 6094] with some clean minor exposures of cornstone nearby, an overgrown quarry in Mayne Wood with some dismal vegetated exposures [NJ 2124 6062], and a relict kiln at [NJ 2139 6087], shown below.  It’s interesting to note the quality of the masonry here, and its relatively good preservation because the golf course has resisted housing developments! 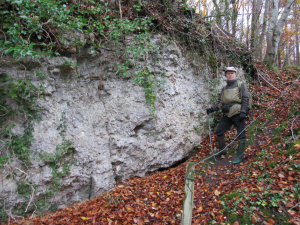 Cothall Quarry [NJ 010 560] near Forres is somewhat of a revelation, there being an extensive excavation with some excellent but variable exposures of calcareous sediments. The quarry is some 200 meters long with a fairly continuous 7.5 metre deep formation, in which there is 3 metres of massive limestone (Parnell 1983).  In places it appears thicker, but this is probably due to local faulting moving the formation vertically.  There is a particularly clean exposure close to the river bank beneath the track (NJ 0109 5597].  Here some of the rock is greenish in colour, due in part to a baryte content (Parnell 1983).  BGS now ascribes this limestone to the top of the Kingsteps Sandstone Formation, interleaved between those beds and the Alves beds above.   Old analysis (Robertson et al, 1949) showed 92.77% CaCO3.

With careful searching, the remains of two small kilns can be found adjacent to the track on the main quarry side [NJ 0117 5596].  Small exposures of the internal bowl masonry and some vitrified rock can still be seen in the side-by-side hollows in the bank.  The kiln size appears at odds with the quarry size.  A larger masonry structure is more common at such large quarry sites.  Limekilns Wood and Limekilns Cottage names possibly give clues! 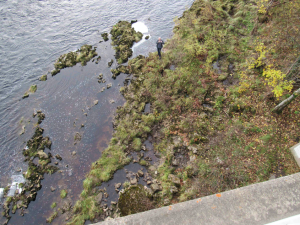 Figure.5: The calcrete exposure at the A96 Findhorn bridge

This cornstone outcrop was noted in earlier surveys to continue downstream to the bridge (now the A96).  Certainly it can be seen across the river on the left bank at Cothall striking northwards, but is now mapped by BGS as a horizon connecting both banks just north of Cothall.  A calcrete is evident on the river Findhorn bed below the A96 bridge, at the NW left bank.  Here, BGS names this the Boathill Limestone Member mapped in a faulted block with Alves Sandstone, thereby not relating it directly to the Cothall outcrop.

At Hopeman, there was extensive quarrying and at least one kiln just to the north of Inverugie House at NJ 151 686.  However there has been recent housing development which has largely obliterated the workings and kilns.  An informal survey and publication by W. Ashley Bartlam in 2001 can be inspected at Elgin Museum.  This describes the site some years back, including mention of two kiln remnants and a gravity tramway to Hopeman harbour.

An extract from Bill Bartlam’s publication below, shows the scale of this kiln, and its state of repair and visibility in 2001: 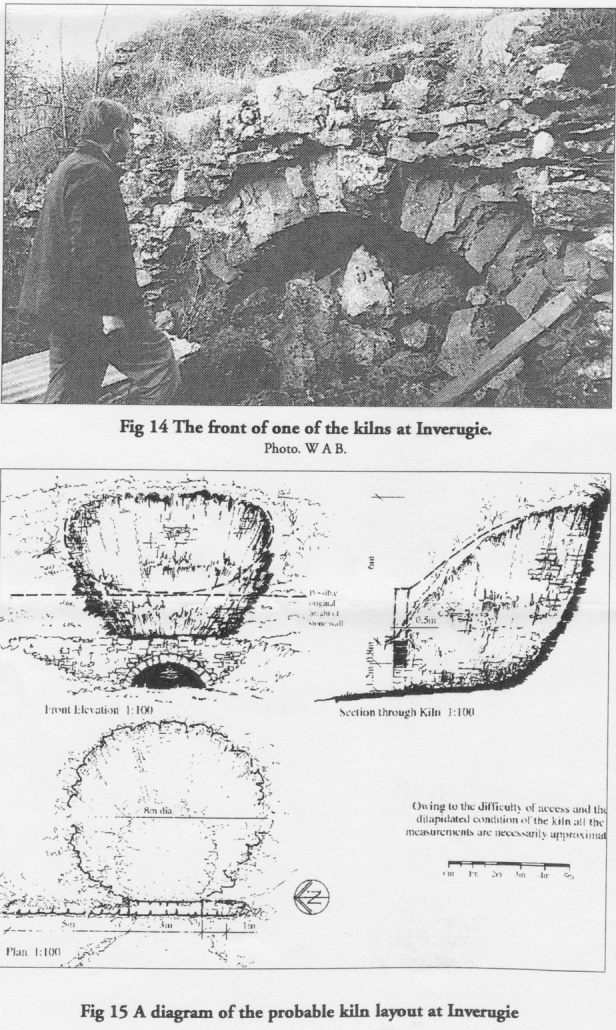 To the east of the middle house in the development there is an area of undeveloped rough ground with a quarry remnant now much infilled with debris.  There is no evident rock exposure or sign of any kiln structure.  Kilns were at [NJ 1502 6865] and [NJ 1504 6863] just west of the quarry, probably now under the garden of this house.  At least one kiln was quite large, about 8 metres in diameter and about 6 metres in height.  From the New Statistical Account:  “Yields were about 3500 bolls of lime at 3s.6d. per boll (Moray barley measure)”

The most westerly house, on the right as you approach on the track from Hopeman, is encircled by a small quarried cliff of cherty rock [NJ 149 685].  With permission from the householder, it’s possible to inspect the chert in all its variability, with some quite clean exposures of both silcretes and calcretes. 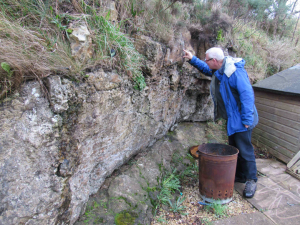 Moving on to Stotfield at Lossiemouth, there is ample opportunity to inspect the Cherty Rock in a considerable coastal exposure.  Here it is primarily a silcrete rather than a calcrete, and has been worked for galena.

There is also limestone in the Buckie Beds at Buckpool, of a different petrogenesis, to be covered in a future article.

Finally, the site of the old quarry at Linksfield, Bishopmill was the location of a large Jurassic clay glacial erratic, which, when much quarried for clay, exposed a quarry floor of cornstone.  A kiln existed at [NJ 2209 6408] where there is a suitable mounded site, but vegetation has obscured any construction.