You are here: Home1 / Events2 / Rosemary Hutton lecture: One hundred thousand years in the life of Earth’s magnetic field3 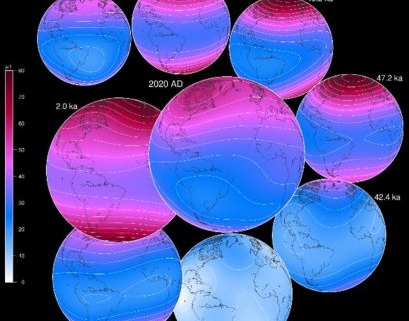 The geological record documenting the existence of Earth’s magnetic field extends several billion years in the past, but it is only for more recent times that it is possible to reconstruct details of how it varies in time and space. Field changes up to a few hundred years ago are well described under the period of direct observation through observatory, satellite, land, and marine surveys, but the most striking variations of Earth’s magnetic field are polarity excursions and reversals. These are uncovered using paleomagnetic methods and clearly demonstrate the existence of a self-sustaining geodynamo capable of producing and regenerating a magnetic field in Earth’s liquid outer core. Both excursions and reversals feature greatly weakened global field strength and increased complexity in field structure, but geomagnetic excursions (sometimes viewed as aborted reversals) are more frequent and generally shorter in duration than full reversals. They are expected to be accompanied by potentially significant societal disruption as the weakened field strength reduces magnetic shielding of our surface environment from space weather. The capacity to recover full field strength following any excursion is thus of some importance, and a full documentation of the characteristics and temporal evolution of excursions is essential to fully understanding the processes that generate the magnetic field. This lecture will discuss the results of global reconstruction of time variations in the geomagnetic field covering the past one hundred thousand years, a period that includes several excursions as well as at least one interval of unusually strong growth in field strength.

Catherine Constable is a geophysicist who has been at the Institute of Geophysics and Planetary Physics at Scripps Institution of Oceanography, University of California, San Diego since 1983. She has occupied a variety of academic and administrative positions at UC San Diego since then, and is currently a Distinguished Professor of Geophysics. Her research is mostly concerned with Earth’s magnetic field, and she is particularly interested in decadal to million year variations in the geomagnetic field and how the changing structure of the magnetic field and events like geomagnetic reversals can inform scientists about processes in Earth’s deep interior. Constable is also an active proponent of the development of databases and cyberinfrastructure allowing electronic access to paleomagnetic and rock magnetic data. Her honours include the award of the Price Medal of the Royal Astronomical Society, and Fellowship of the American Geophysical Union, whose Edward Bullard lecture she will give later in the year.