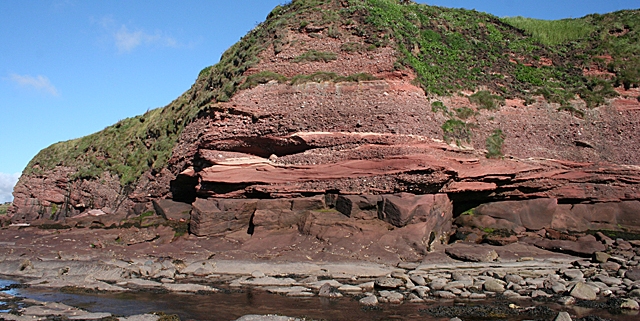 The Midland Valley Terrane is underlain by basement rocks of about 480 million years that contain relicts of oceanic crust, magmatic intrusions and the volcanic arc that collided with the Laurentian margin during the first phase of the Caledonian orogeny. This basement was eroded and covered around 460-430 million years ago by a local succession of sedimentary rocks. Similar inliers occur throughout the southern margin of the terrane.

In the mid-Paleozoic, large amounts of sediments of the Old Red Sandstone supergroup were deposited in separate basins – Strathmore in the north and Lanark in the south. They were followed by upper Paleozoic sedimentary rocks – the Carboniferous succession of the Midland Valley – which in turn are overlain by end-Paleozoic sedimentary rocks deposited around 300-270 million years ago. Volcanic deposits appear interspersed throughout. The Variscan orogeny related to the formation of the supercontinent Pangaea occurred around 380-280 million years ago and was accompanied by magmatic intrusions.

The Mesozoic and Cenozoic eras are represented by sedimentary rocks of the New Red Sandstone supergroup, deposited 250-200 million years ago, and intrusions of the Hebridean Igneous Province respectively, both of which outcrop almost exclusively on the Isle of Arran.

This informal short course over 6 weeks provides a chronological overview of the formation and deposition of major rock groups from about 3000 million years to 50 million years ago, from Scotland’s oldest rocks to the young volcanic districts of the Hebrides. It will be presented online by Dr Alex G. Neches and guest contributors.

After registering, you will receive a confirmation email containing information about joining the meeting.

A Cruise to Lamberton Skerrs